Jovian, everything is possible 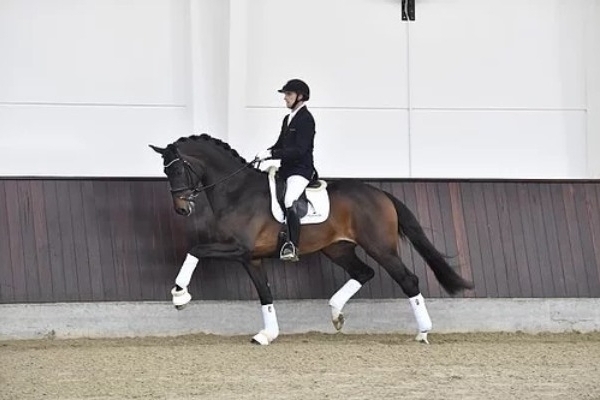 Jovian, owned by his rider Andreas Helgstrand, is the stallion of all possibilities. This son of Apache (ridden by Emmelie Scholtens at the highest level) and of Zinith (by Tango) has an unblemished record.

In 2017, the bay dressage stallion won the first title of his career: 3-year-old Dutch Champion. The year after, as a four-year-old, he won his performance test in Verden with a score of 9.01 and was awarded at the Danish approval. He finished 2nd in the Pavo Cup in the Netherlands that same year. At the age of five he won the World Championships for Young Horses for the first time and finished on the second step of the podium at the Danish Championships. In 2020, the pandemic prevented the stallion from repeating the previous year's World Championships, even though he was in the national selection. At the age of seven he confirmed his talent by winning the World Championship title once again.

Because he has everything going for him, Jovian is not only a remarkable sport horse, but his breeding career is at least as remarkable. No less than 1,000 offspring were born during his first three years of breeding, including two well-known stallions: Joshua and Jovial. He has also been used in France and his production has been noticed in particular among foals born in 2021: his sons Lorian de Valdi and Lancôme de Roumard both stood out at the France Dressage Final, finishing 3rd and 8th respectively.