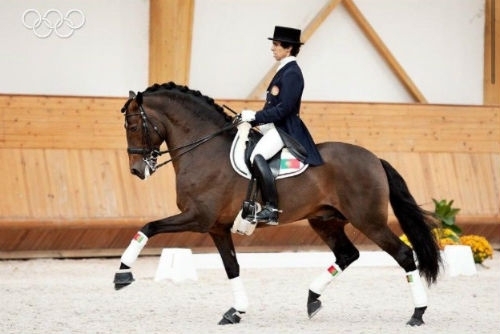 The stallion Rubi AR has put the Lusitano breed on the map like no other before him in the discipline of dressage. He has had a spectacular sporting career and his offspring seem to be doing the same.

Rubi AR was born in 1998, he is a son of Batial AR and He-Xila (by Xaquiro), and measures 1.68m. He has a remarkable record of achievements, including a 16th place at the London Olympic Games (ridden by Gonçalo Carvalho), a participation in the World Equestrian Games in Lexington in 2010, the European Championships in Rotterdam in 2011 and in Herning in 2013.

In addition to his sporting results, Rubi AR has been an excellent sire and was even ranked 31st in the WBFSH dressage stallion rankings in 2019, alongside the best stallions in the discipline such as Desperados, Londonderry, Weltmeyer, Ferro, Negro, and Lord Leatherdale... In 2020, he continued to progress and was ranked 27th.

His offspring have already proven themselves at the highest level: his son Fenix de Tineo finished 22nd individually at the Olympic Games in Tokyo in 2021. Among his offspring, we also find Coroado AR (who has distinguished himself on the Big Tour in CDI 4*), Beirão AR (who is competing in Grand Prix and has been selected to take part in the Tokyo Olympic Games), Douro (national champion on the Small Tour in Portugal), Herói (who won the 4 year old criterium in Portugal) and many others!

Rubi AR is by far the best dressage stallion of the Lusitano breed, with an unrivalled record of achievement, which has enabled him to reach 19th place in the FEI Ranking, bringing to a close a 10-year long international career.