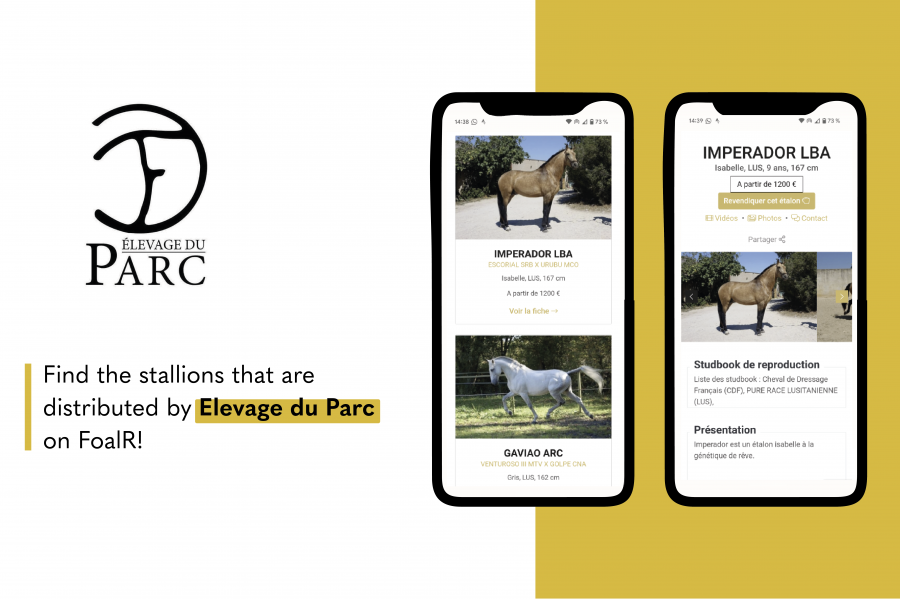 Elevage du Parc, located in the west of France, near Nantes, is a reference in French dressage horse breeding, with no less than 4 approved stallions.

Elevage du Parc is the challenge that Philippe Ferrand set himself in 2005: to breed dressage foals, both Lusitanian and German. And it worked! The "du Parc" horses have performed on numerous occasions at the French Dressage Finals: Einstein du Parc (Don Juan de Hus x Sandro Hit) finished 3rd in the French 3-year-old Championship in 2017, while his brother Fragolino du Parc won the same category the year after. Under the saddle of Mathieu Berville, the son of Don Juan de Hus had an excellent 2022 season as he qualified for the World Championships for 7 year olds in Ermelo which will be held from 8 to 11 September.

Among the stallions of the stud offered for breeding, there is Imperador LBA, son of one of the best Lusitano breeding stallions: Escorial. Imperador has a score of 71.5 and is CDF (Cheval de Dressage Français) factor. He transmits to his offspring large rays, a very good topline and 3 excellent gaits.

Suberano du Parc (Carinho des Noës x Hathor des Frettes) is a multiple AFL regional champion. He took part in the Saumur finals at the age of 2, 4 and 7, was European Inter II MCI vice-champion in 2017, and is also CDF factor.

Real du Parc (Kaolin des Frettes x Hathor des Frettes) has an equally impressive record: he is a multiple AFL regional champion, he took part in the Saumur finals at 2, 3 and 4 years of age. He was French AFL champion at 5 years and older in Beaucaire in 2018, European Inter II MCI champion in 2017, bronze medallist at the European Grand Prix MCI Championships in Paris in 2018, and performer on the Medium Tour in 2018...

Finally, Gaviao RC (Venturoso III MTV x Tinoca MDP) was scored 80 points in his stallion test and is the only stallion in France to have this score!

To find out more about the stallions distributed by Elevage du Parc, their breeding conditions and to contact Philippe Ferrand, click here!