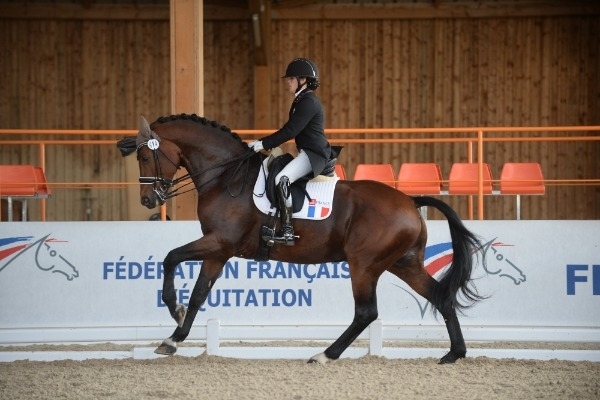 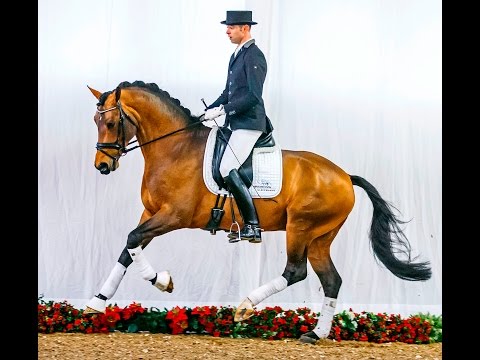 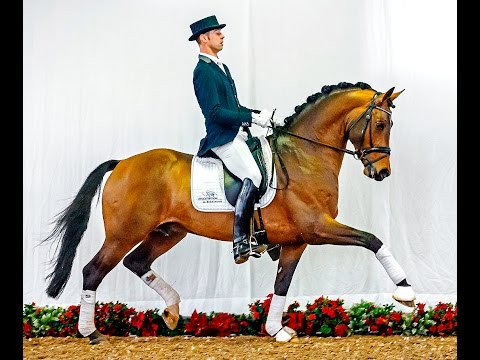 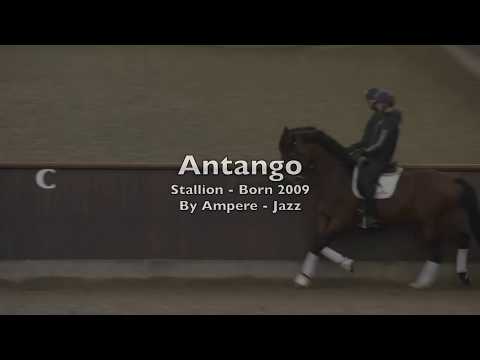 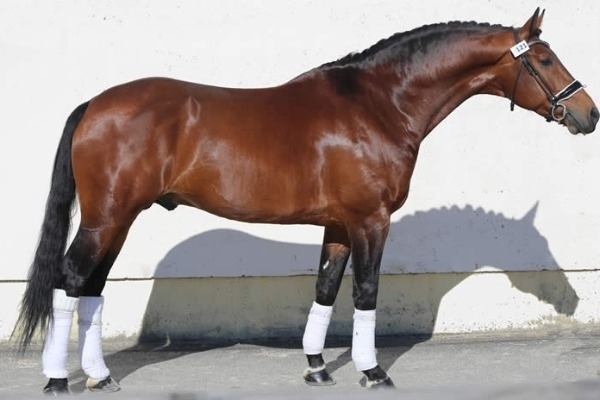 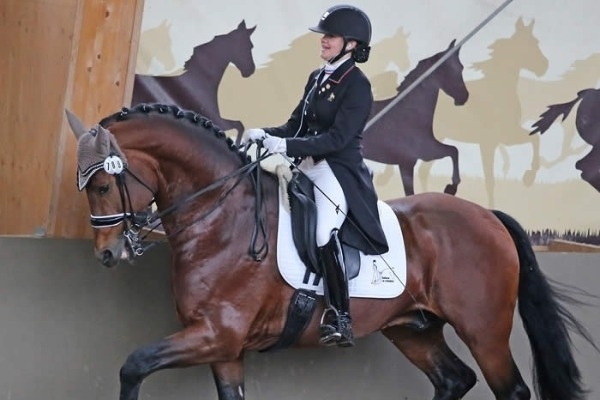 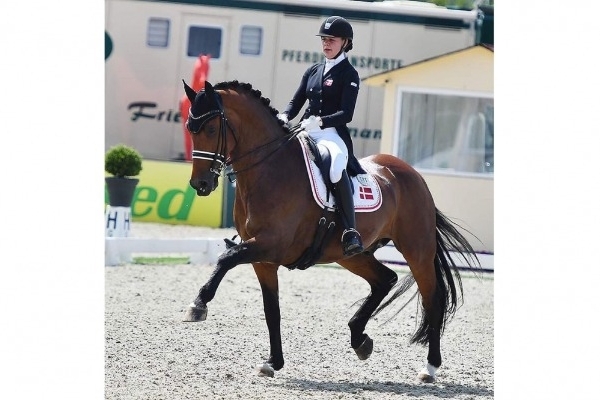 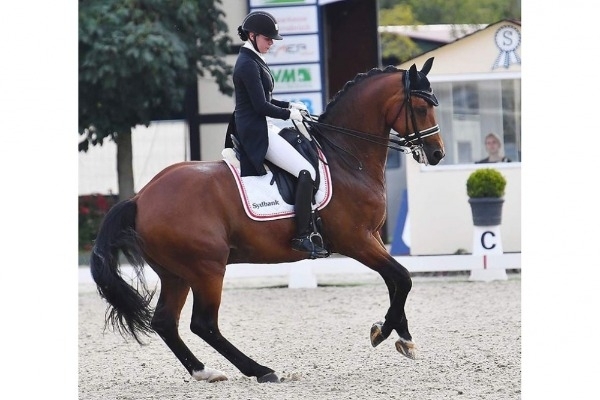 Antango du Feuillard comes from one of the best maternal lines of the KWPN Studbook: Her dam, Oronia (Jazz x Ulft) has obtained all the labels for the quality of her genetics and her production: Elite - Preferent - Prestatie - Sport (Dress). She is also the dam of Don Tango B, 7th at the Dutch Championship and selected for the World Championship for 5 year olds the same year and medallist at the European Championship for Juniors and Winners in CDI.
All the female genetics are prestigious as we find broodmares all labelled in the KWPN breed.- The very famous international performer, Olympic Ferro, sire of the stallion Rousseau, Joeris (associated with Ph. Limousin in GP Dress), Jasper (GP Dress), Joery (GP Dressage),... and who also produced jumping horses like Janoeska (1m40), Kokarde-E (1m40),...
- The stallion Flemmingh, sire of leading International horses in dressage like Krack C (Rider : Anky Van Grunsven) or Lingh (Rider : Edward Gal) and who has also produced show jumping horses like Jilvano (1m40), Kalli (1m30), Koko-Lady (1m30),...
- The 1st of the KWPN sires on descent, Jazz, sire of countless Grand-Prix horses and stallions,
- Ulft's blood represented in both paternal and maternal strains, he is the sire of many jumping stallions such as Boston (1m30), Dagmar (1m40), Baltimore horses, Cyrano (1m35) and dressage horses, Caesar (GP Dress), Dexico (GP Dress), ...

Using Antango du Feuillard on your mares is a reasoned choice. His first generation in Germany obtained in 2013, the 1st prize for the quality of his foals by the Studbook Oldenburg and 2 of his sons won in 2017 the stallion competitions of Neustadt / Dosse and Marbacher Wochenende in Germany. Antango du Feuillard, has already 4 sons approved Stallions in Germany!

Strength, suppleness, balance, drive, size and chic are the main qualities that Antango du Feuillard transmits to his products. One should not hesitate to cross with full-blooded mares as her mental is so exceptional. His pedigree also allows him to be used as a cross for jumping and eventing. Antango du Feuillard is one of those stallions that the Germans use even though he belongs to a foreign studbook because his genetics are so interesting. Osteoarticular status: Excellent
Approved to produce Selle-Français and Old. KWPN registrable foals.

His sire, Ampere was crowned KWPN Stallion Selection Champion in 2008 in the Netherlands. That same year, he passed his 70-day performance test at Ermelo where he scored the highest ever. He scored an incredible 9.5 for canter, 9 for handling, trotting and dressage and a remarkable 8 for walk. He is the sire of 60 stallions and has seen some of his offspring achieve Top Prices at auction. One of them was sold for €200,000 at the Vechta auction. Among his offspring are winners in CDI St Georges and Inter I like Emerald S, but also, in Show Jumping and Eventing like his son Edison.

His paternal grandfather, Rousseau was in 2003 crowned World Vice-Champion of Young Dressage Horses in Verden.

His paternal great-grandfather, Flemmingh placed 3rd in his performance test in 1990 by scoring 9 on 3 occasions, and in 2008 he finished 6th in the WBFSH Dressage Stallion rankings. His offspring include Krack C and Lingh, both of whom played for the Dutch dressage team.

His paternal great-grandsire, Ferro is known for being one of the few stallions to have been awarded the "Preferent" label during his lifetime. This label, which is the highest honor bestowed by the KWPN Studbook, is usually awarded posthumously. He is also known to have performed in dressage at international level. In 1998 he was placed 6th at the World Games in Rome. He also won the Grand Prix at the Berlin CDI and finished 5th at the Sydney Olympics. His products include Jazz Dancer, Ferrari and Joeris among others.

Antango du Feuillard is the descendant of one of the best maternal lines in the KWPN Studbook. Indeed, there are many broodmares within this line that are all KWPN-labeled.

Her dam, Oronia has been repeatedly placed and won at St Georges level and in Inter I in the Netherlands. She won all the labels for her production as well as for her genetic quality. She obtained the extraordinary breeding index of 189 at the KWPN. She has 11 offspring including Don Tango-B who won the KWPN stallion test and Vontango-B who was placed several times in Grand Prix and finished 4th and 6th in the CDI3* in Addongton in 2012.

Her maternal granddam, Joyce sired 7 offspring including Evita B who won in dressage.

His maternal grandfather, Jazz won the CHIO at Aachen with the German team in 2005. He also won the Grand Prix in Kootwijk with a fantastic score of 72.78%. He scored a wonderful 182 for his maximum index. In 2006 he was awarded the title of "Horse of the Year" at the KWPN. In 2017, he was voted the 5th best sire of winners in the WBFSH dressage rankings. In the same year, he was also the most represented stallion at the top level and is among the most popular stallions in the Netherlands and in the World. Jazz has been in 1st place in the WBFSH stallion rankings for several years. Within his progeny is Olivi, who was crowned Vice-Champion of the KWPN Studbook 3-year old stallions in 1999.

His maternal great-grandsire, Ulft is a KWPN stallion whose offspring include Ferro, Dagmar and Boston.

Antango is a modern stallion with very elastic and dynamic movements. He has a very strong hind leg activity and a huge charisma. His walk is ample with 4 beats, he shows great suppleness and cadence in the trot, his canter is powerful in excellent balance.

Antango du Feuillard achieved outstanding marks in his 30-day test in Germany in 2012. Indeed, he scored a tremendous 9 for canter, 8.75 for trot and 8.5 for ease under saddle. The following year, he also received admirable marks for his 70-day test. In the same year, he won for the quality of his first foals the 1st prize of the Oldenburg Studbook.

In 2020, he was selected by Denmark to participate in the European Young Riders Championship. During this championship, he scored 71.617% in the individual test and 70.382 in the team test. That same year, he won the CDI Horses Dream at Hagen with a wonderful score of 72.598%.

Performances 2022
18/06/2022 - Winner of the Kür Young Riders (Rider: Maria Mejlgaard Jensen) at 72.75 % - CDI 3* in Hagen (Germ)
Antango du Feuillard had many successes in CDI Young Riders including a 2nd place in the CDIY in Herning and Stadl Paura, 4th in the CDIY in Aalsborg, 5th in Opglabeek,... He is Team Gold Medalist at the CDIY of Stadl Paura.

Antango de Feuillard is a bay stallion who passes on his tremendous suppleness, strength, balance as well as size and chic to his offspring. This modern stallion has dynamic and particularly elastic movements as well as an undeniable charisma. He can be crossed with mares of blood because he has a very good mind. He can also be used for a complete cross considering his pedigree.

Antango's genetics are very interesting and that is why he is employed in Germany by another stud book. In 2013, his first generation of foals got the first prize of the Oldenburg studbook as they were so good. His offspring are known to possess 3 beautiful gaits, a modern look as well as a pleasant character.

In 2016, his daughter Vinja landed the Top Price at Vetcha auctions. At the age of 10 years old, he has within his offspring 4 stallions approved in Germany. In 2017, two of his male offspring won stallion competitions in Neustadt. Two years old, one of his sons was sold for €72,000 during the 2019 South German Stallion Licensing auction.