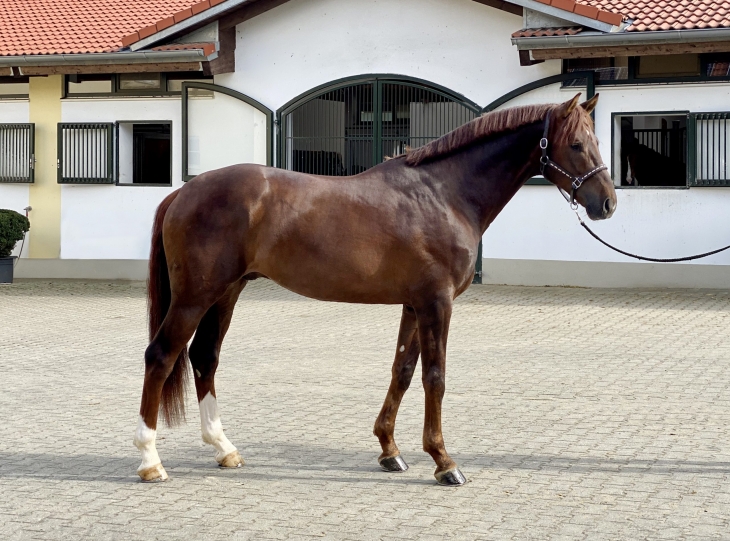 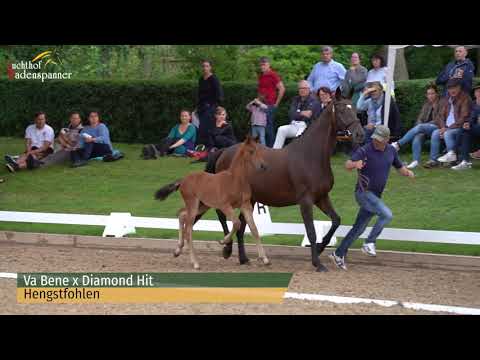 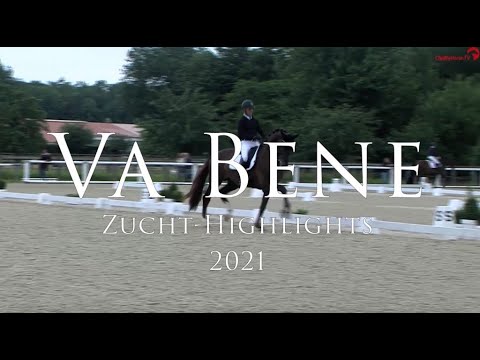 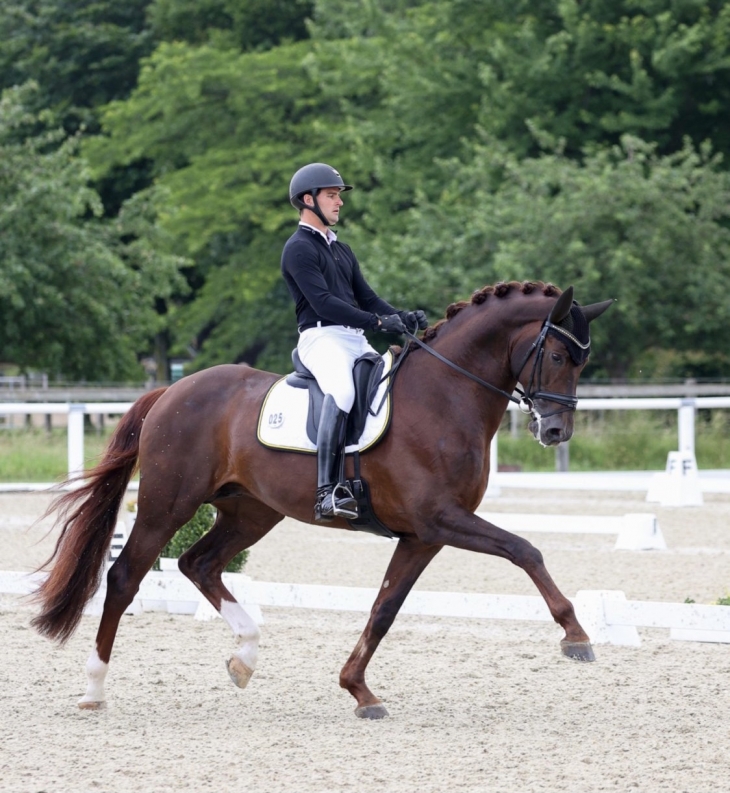 Born in 2016 at Zuchthof Wadenspanner in Bavaria, Germany, Va Bene was approved for the DSP (Deutsches Sportpferd) breed (Southern Germany) in November 2019.

Well-built, harmonious model, Va Bene moves with great elasticity and regularity, always in balance. He is a young stallion who "stands out" by his presence and his locomotion.

Va Bene is approved for the DSP (Deutsches Sportpferd - Southern Germany) breed, for Hanover, for Oldenburg and for Westphalia.

Veneno HC, the sire of Va Bene, born in 2011, is descended from Vitalis x Diamond Hit x Landadel. He comes from an excellent maternal line. He did well in the 30-day test at Schlieckau in November 2015 (dressage 8.25). He had travelled a bit between Belgium, Denmark and Germany. In 2018, Veneno turned out in the Prix St Georges dressage test. In 2019, he went out in S level (Grand Prix) (4th place in the qualification for the Nürnberger Burgpokal under Beatrice Buchwald). In October 2019, Kristy Oatley, the Australian rider, is acquiring Veneno (to go out in high level competition).

Bellissimo M, the dam's sire, is very well known as a sire and a guarantor for ease under saddle. According to the German NF, 1,402 offspring are registered as sport horses, of which 119 are turning out in dressage at S level.

Va Bene is out of the Westphalian maternal line Stutenstamm 239 "Almfee" (by Almprinz), with which the Zuchthof Wadenspanner has already produced excellent horses for breeding and sport.

The 1st dam of Va Bene, the state prize-winning mare Passion by Belissimo M, is the full sister of the mare Preziosa 12, who won the 4-year old final at the Bundeschampionate in Warendorf in 2009; at the 5-year old final in 2010, Preziosa was a finalist.

The Bavarian stallion Piaster, the sire of Va Bene's 2nd dam, is descended from Pik Bube (- Pik König) x Lotse (- Lugano I) x Gotthard (- Goldfisch). According to the German FN until the end of 2020: 352 of his offspring are registered as sport horses, of which 23 are competing in dressage level S, 6 in show jumping level S (= Grand Prix) and one offspring in driving level S. His daughters Domenika and Pikante have been competing in dressage level S* and S**/St. George/Inter I . Piaster (born 1982 at Zuchthof Wadenspanner) was very popular as a sire in Bavaria. In 2020 he was declared "Stallion of the Year" by the Bavarian State Association. Piaster is also a good sire of dams, e.g. Quietschbunt (gelding by Quaterback x Lord Loxley I x Piaster, born in 2012, is very well placed (2nd place) in S* dressage tests)/Sir Rudolpho 2 (by Sir Nymphenburg x Piaster, successful in M* dressage tests)/Done 4 (by Caprimond x Piaster, born in 2008, turns in S* dressage/St. George's Prize)/

The stallion Frühschein was a very good improver in Westphalia. His son Frühling was a horse with many qualities. Frühschein and Frühling can be found in many of the Westphalian horse origins. DSP Belantis I and Belantis II, for example, also descend from Frühschein.

At the Bavarian Regional Championships in July 2019, Va Bene is 3e in the 3-year old stallion final under Walter Wadenspanner. Va Bene passes a very good 50-day test in Schlieckau from 1October to November 19, 2019 with a final dressage score of 8.59 (overall impression 9.0; ease under saddle 9.25; canter 9.5). In December 2019, he won a riding event for 3 years old horses in Kreuth. In July 2020, Va Bene wins a riding event in Münster.

On 27 February 2021, Va Bene placed 2nd in a dressage test (Klasse L) in Ising, Bavaria. In June 2021 in Warendorf, Va Bene passed the first qualification for the second selection for the World Championships for Young Dressage Horses 2021.

In March 2022, Va Bene won a dressage test level Dressurpferdeprüfung L. On May 5, Va Bene won a qualification for the Bundeschampionate with the score of 8.70 (10 for trot, canter and general impression) under Johanna Wadenspanner.

His progeny is still very young. At the various foal shows in Southern Germany (especially Bavaria) in 2021, many, many Va Bene foals received a premium.

Va Bene transmits his own qualities crossed with different mares.