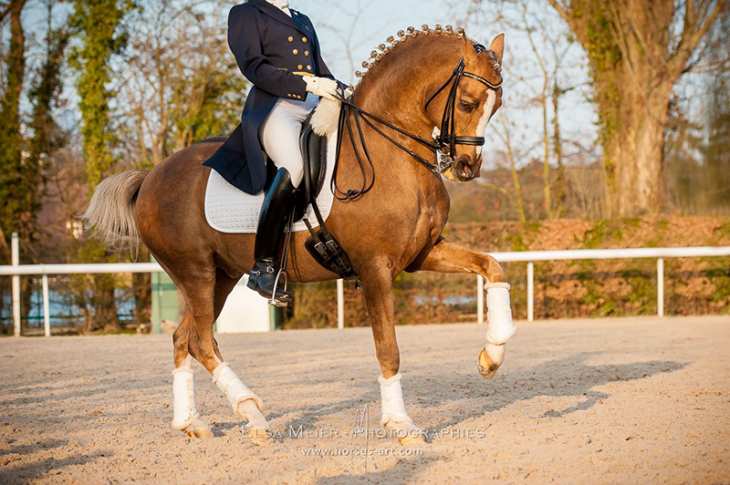 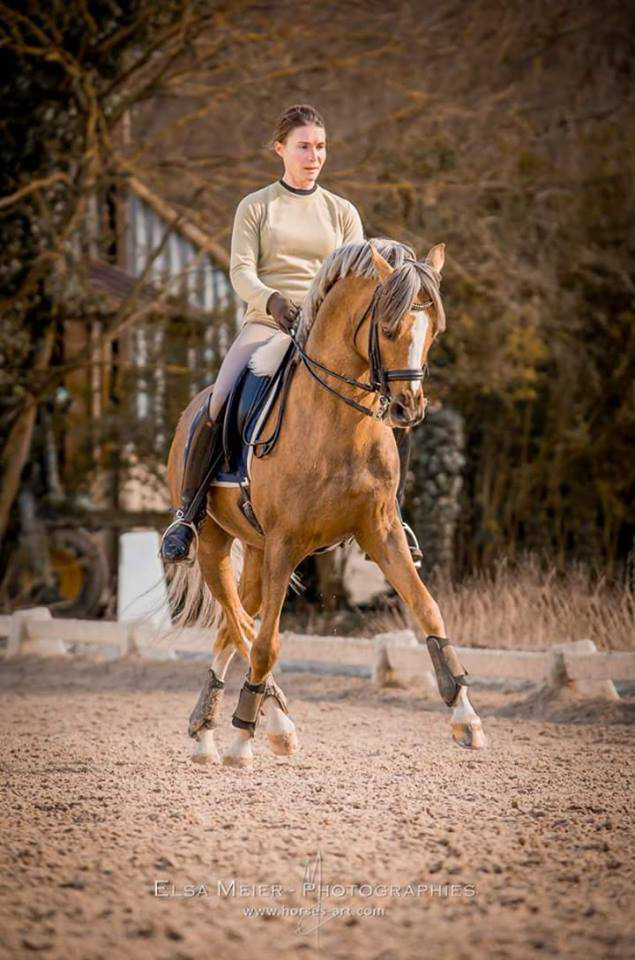 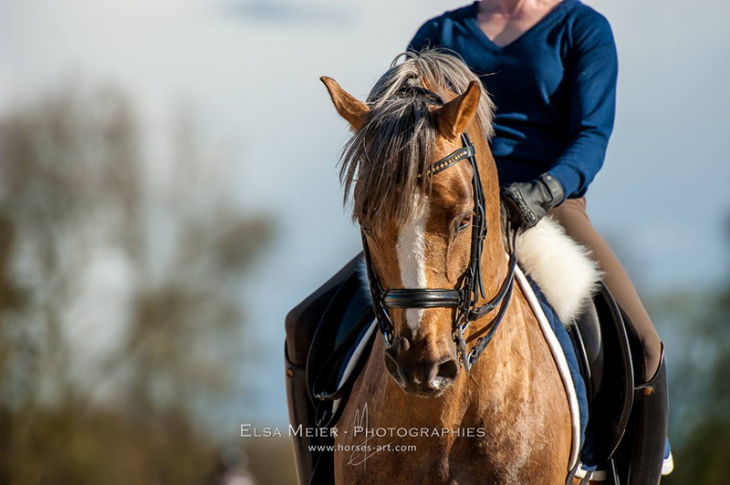 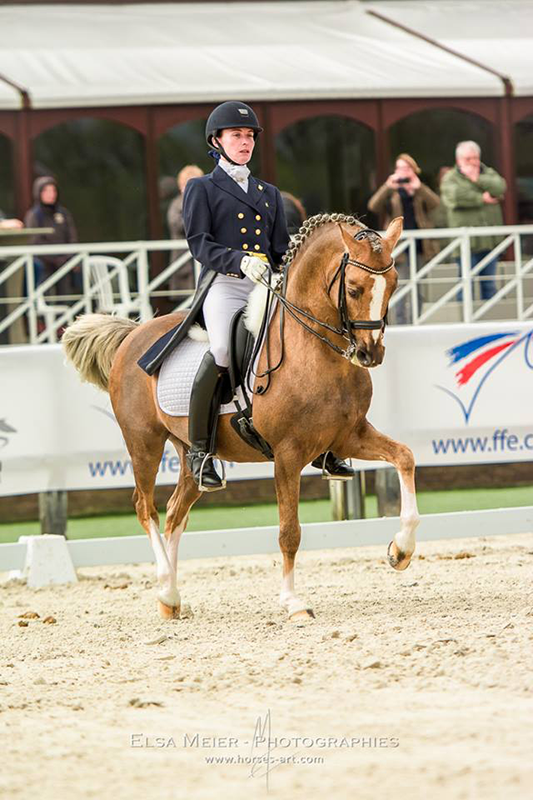 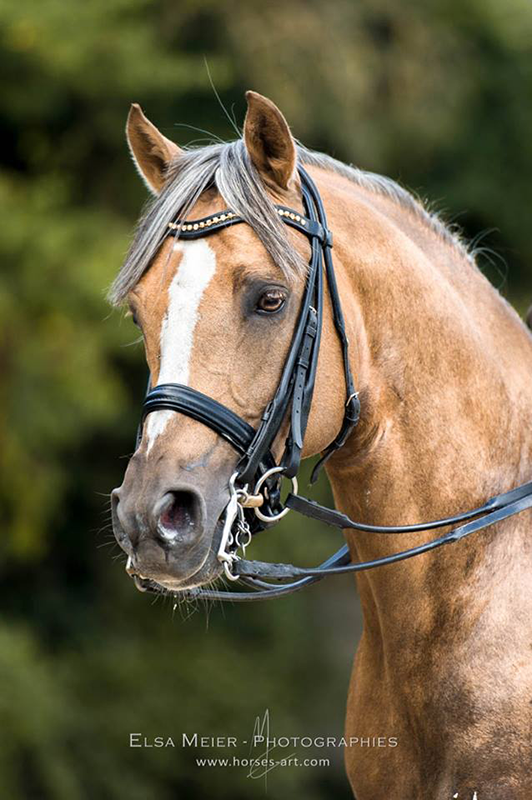 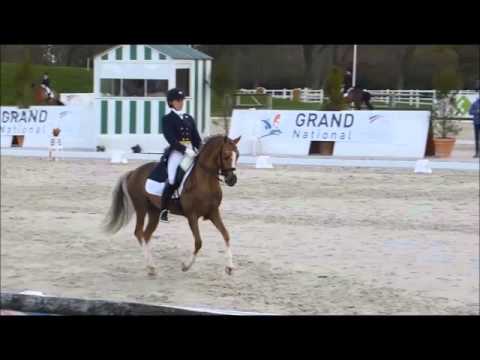 From his first years of riding, very well made, chic, moving foals were born. Champion can be crossed with all types of mares. He brings chic, improves neck, back as well as locomotion. He can transmit his cream gene by producing diluted colors, and can bring white. He also carries the sooty gene which will be able to give dark colors, such as burnt chestnut, smoked isabelle, copper palomino.

His origins are excellent. Indeed, his sire is none other than the famous FS Champion de Luxe, this exceptional "little" stallion with an impressive record of achievement: pleasure champion in Aachen in 2000, winner of the German Championships in 2001 and 2002 in Warendorf, great winner of big dressage and eventing events in 2003 and 2004, he is one of the best ponies across the Rhine. In 2005, 3 of his sons are approval champions and 2 are reserve champions. Each year, his production is surprising by his presence on the German podiums. He is very much used in Germany and his production reflects his image.
The dam of Champion de Luxe is from the Golden Dancer x Power Boy cross, Golden Dancer being one of the best dressage ponies of the last few years, having been crowned European Team and Individual Champion several times.

His dam, Power Lady, is a daughter of the excellent dam sire Power Boy. The latter is the sire of many great sires, including the international Power and Paint and FS Pavarotti. He is present in the pedigree of many German performance ponies, and is considered one of the greatest breed leaders in Central Europe.
Power Lady's dam is a granddaughter of Valentino, another great breed leader who has marked his time and ours with his renowned progeny.

Power Lady has produced three licensed stallions: Supreme Summer Champion and her two own brothers: Top Champi, sold to the famous stallion owner Josef Völle, winner of the preliminary at the German 3 year old Championships, and a young 2 year old pony still unnamed. A fourth son was refused approval as he was considered too small. Power Lady's daughters have been put, or will be put, to breeding.

Foal, he won the silver medal at the Aachen competition. At two years old, he was approved for the Rhineland and Westfalian studbooks, receiving the PrämienHengst grade. In 2011, he placed second in the Critérium d'Ile-de-France Amateur 2. In Saumur, during the Grande Semaine du Dressage, he was awarded the Label Plus Dressage, having made a strong impression.

In 2012, he was crowned French Team Champion in Ama2 at Jardy, obtaining the best scores on two of the three occasions.

In 2013, he was Approval Champion of the PFS studbook. He started the season on the Pro3 circuit by averaging 64.4% on the A9 - Pro3A at Jardy, then averages approaching 67% at the Pro Elite at Jardy.