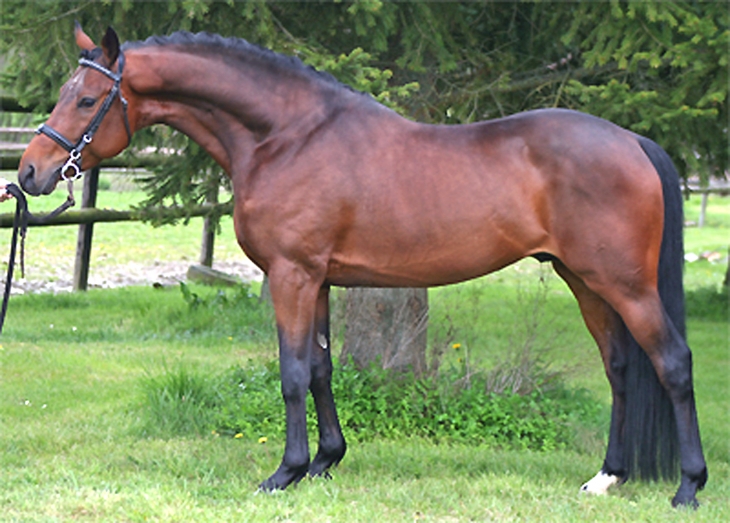 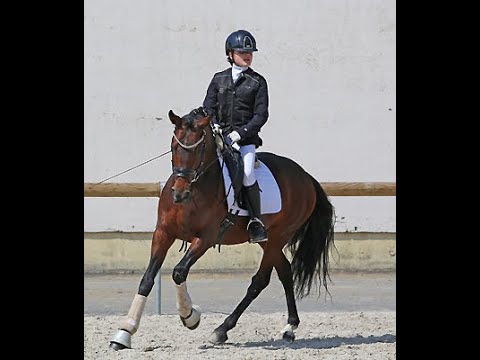 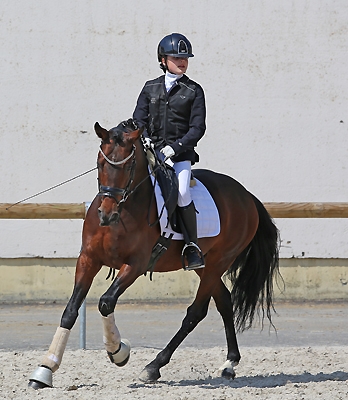 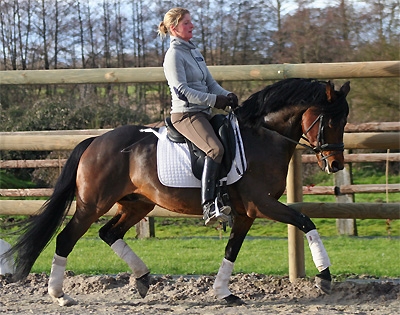 L-Harlem du feuillard, bred Belgische Rijpony by Champion de Luxe, was crowned French Dressage Champion for 3 year old males in 2010 and labelled ELITE at 6 years old on performances in competition. He was born at the Haras du feuillard in France. He is distinguished by a great amplitude and a beautiful energy. He has an excellent 4 beat walk, a trot with a lot of elasticity and suppleness of shoulders and a round and balanced canter. We love his character and his ease under saddle for children. He competed successfully in 2011 and 2012 in the Cycle Classique 4 years old and 5 years old dressage and was ranked ELITE in the Cycle Classique 6 years old at Saumur in 2013. In 2014, It is under the saddle of the young rider of 11 years old, Eugénie BURBAN that they become Departmental Champions (Orne) and Champions of the Normandy-Brittany Inter-Regional and Silver Medal on the Grand-Prix event.

He is a rather sporty modern stallion who should mark his offspring with his chic and scope but also pass on his supple shoulders, his commitment of the hindquarters, his amplitude and his beautiful energy. He is a size D pony of 1m48 unshod. In his stock, we find the blood of Singasinga xx, a Thoroughbred stallion who has raced on the flat and over jumps, as well as the exceptional Thoroughbred sire, Grand Trésor, who has produced numerous winners, some of whom have distinguished themselves at the highest level in France and England. He is therefore particularly interesting to use in Dressage but especially to produce ponies for eventing.

Luxury Champion performances are numerous, of which here are the most significant:

Champion of the approval saddle ponies in 2000 in Aachen

Winner of the Rheinland championship in 2001

Winner of numerous A and L level events

The champion mare in Hessen 2006 and Rheinland champion 2006: Dark Surprice

The winner of the 2007 Prussendorf stallion trials: Champ de Luxe

The runner-up in the 2007 Adelheidsdorf stallion trials: Chicago

GOLDEN FLEUR
Her dam Golden Fleur, is herself a Rheinland Pony Breeding Champion and dam of three state award-winning mares and two award-winning stallions who were champions at stallion trials.

So there are three European-level winners in her progeny.

In the paternal line, we find the blood of the fabulous crack : FS GOLDEN DANCER :

DANCER, who is none other than the sire of the illustrious GOLDEN DANCER, Winner of the European Dressage Championships, great grandson of Downland Chevalier. We find in the ancestry of Golden Dancer : Dornik B who is three times European Champion of Dressage Ponies.

SINGASINGA
Singasinga xx is a thoroughbred stallion who has raced on the flat and over jumps with 3 wins and 13 placings in 29 races before being injured. Groom Dancer has run on the flat with 8 wins and 1 place in 11 races.

Grand Trésor xx, had started his career at the age of 2 on the racecourses in the West where he was originally from. He had distinguished himself on the flat and in jumping races. He was an exceptional sire, producing numerous winners in races, some of whom distinguished themselves at the highest level, both in France and in England.

Grand Trésor, by Grandchant and Clef du Trésor by Timmy my Boy, was born in 1981 at the prestigious Madame Couturié breeding farm in Savigné l'Evèque in the Sarthe. He started his racing career at the age of 2 years old, winning a race at the Saint Cloud racecourse. At 3 years old, he distinguished himself at Maison Laffitte and finished 4th in the Prix Lutèce (Gr III) at Longchamp. Over jumps, he placed in the Grandes Courses de Houches at Auteuil, Enghien, Cagnes sur Mer, the Grand Prix d'Automne at Auteuil, winning the Grande Course de Houches de Printemps at the age of 6. His racing career ended with 11 wins including 7 over jumps and 29 places including 21 over jumps.

With a highly sought-after strain in jump racing crosses, he gave his offspring background and jumping ability, not to mention a dash of speed that was essential on the racecourse to come and win on the flat in the final metres. His offspring have won more than 400 victories and 1600 places. Among his offspring, we can mention EDREDON BLEU who won the Gr.1 King George VI Chase, the Gr.1 Queen Mother Champion Chase, the Gr.1 Ritz Club Ascot Chase, the Gr.2 Peterborough Chase (twice), the Gr.2 William Hill Haldon Cup, TRESOR DE MAI who won the Gr.1 Ritz Club Ascot Chase, MUSARDO winner of the Gr.3 Prix Léopold d'Orsetti, and Général de Saint-Didier L ; HARMONIE TRESOR winner of the Gr.3 Prix Robert de Clermont-Tonnerre, 2è Prixdes Drags Gr.2, La Périchole Gr.3 Grand Prix de Pau Gr.3, 3rd Prix Morgex Gr.3, 4th Grand Steeple-Chase de Paris Gr.1, FAIR PLAY winning the Prix Gaston de Bataille-Grand Cross de Pau L (3 times) ; Gael d'Angron winner of the Grand Steeple-Chase de Waregem, 3rd of the Gran Premio di Merano Gr.1 In 2006, he was still 4th in the national list of sires of AQPS winners over jumps.He will be missed by all the breeders in the West and in Brittany.

In 2011, he won two events in the classic cycle labeled 4 years old ponies with 2 first premiums that qualified him for the next 4 years old final.

In 2012, he won two events in the 5 year old pony dressage classic cycle with 2 first premiums.

In 2013, he was ranked Elite in the Classic Cycle 6 years old dressage and received his AES studbook approval.