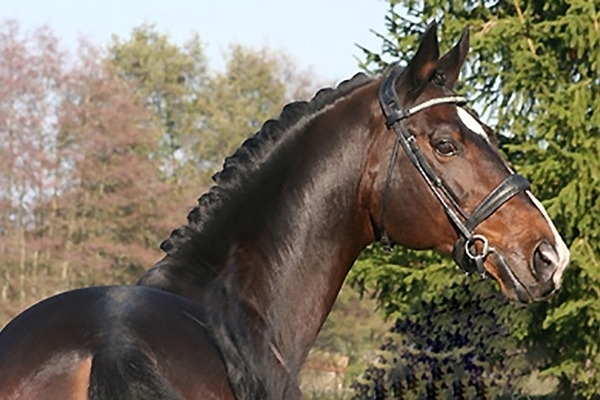 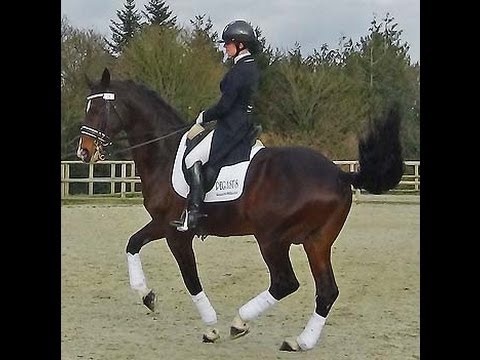 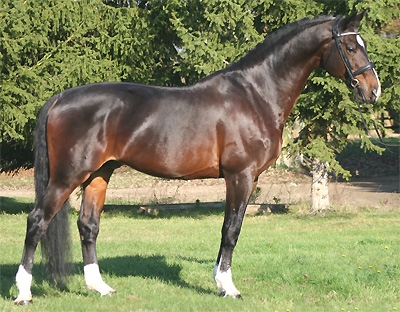 Pegasus, son of the late Gribaldi is interesting for French breeding because he is distinguished by his suppleness, his propulsion, his elasticity and an exceptional mind. He transmits to his offspring: a solid model, size, chic, suppleness, scope and ease under saddle. He is suitable for all types of mares.

This is exceptional genetics at a price accessible to all! His quality / service price ratio at 550 € including VAT in 2023 with a Foal Free Return basis is particularly interesting for the production of Dressage horses. Esteban's maternal line has produced good international winners in show jumping, as has Nimmerdor, which means he can be used for jumping, eventing and Hunter. Osteoarticular status: Excellent. Pegasus is approved to produce Selle-Français."

Gribaldi, the sire of Pegasus, was a Trakehner Stallion Selection Winner in 1995 and 1996. The following year he won the 4 year old competition and was "Reserve Champion" of the Pavo Cup. In 1999, Gribaldi won the AMEV/Hippo Cup. In 2010, he was voted 3rd best sire and best sire of world winners in dressage at the Stallions Ranking WBFSH. In 2019, he was awarded 17th place in the WBFSH Dressage Stallion Ranking. His offspring include Totilas, who was World Champion in 2010 at the World Equestrian Games, Imhotep who was Trakehner Stallion Champion, and Painted Black, who won the World Cup. Among his offspring indexed in France are Reiko, Sultan and Ribaldi. His oldest offspring are 12 years old and some of them compete at Grand Prix level. He is renowned in the Netherlands for producing horses with piaffe and passage facilities.

His paternal grandsire is Kostolany, a Trakehner stallion who has evolved at Grand Prix level and won the Siegerhengst in 1995. He is the sire of several approved stallions such as Silvermoon, Showmaster and Bertone and two champions.

His paternal great-granddam Kapstadt is a Trakehner mare who was crowned Elite Mare in 1995.

His dam Kagasus is a KWPN mare.

His maternal grandsire Esteban's offspring include Ino and Hofgut Liederbach's who are victorious in international show jumping.

His maternal granddam Pagasus is a mare with the "Keur" label. She has sired two offspring who both have the "Ster" label.

In 2006, he won the Inter I event at Pompadour and was placed second in the Prix St Georges at Biarritz. Two years old, he finished 2nd in the Pro I Grand Prix Préparatoire. In 2009, he was crowned Winner of the Pro Elite Grand Prix.

You could say of him that he is made as a sire. He has a very nice neck, a short, very strong back and a powerful hindquarters. Very pleasant under the saddle and endowed with a calm and generous character, .

he also has excellent tissues. He is very strong in all the movements gathered and of Grand-Prix level: Passage-Piaffer-Spinning-Changes of feet on time. He has placed in classes: Pro Elite Grand-Prix and Intermediate II.

Comment from the 2013 Stallion Guide published by L'Eperon: "After a successful career in Young Horse events, where his quality was unanimously praised, he progressed to the Grand Prix. His gaits and origin already make him an interesting stallion and his dressage ability, known to experts, makes him recommended for all types of mares. He deserves to be used despite his age. His first offspring will be seen with interest."

2003 : 3rd of the French Championship of the Classic Cycle 6 years old in Saumur

2003 : 1st in the final round of the 6 years old Classic Cycle Championship in Saumur

Pegasus is a black pangaroo stallion who bequeaths to his offspring a tremendous amount of chic, suppleness, size, scope, his ease under saddle as well as his model. He is suitable for all types of mares. He is extremely interesting to produce dressage horses. He is allowed to be conceived for Hunter, Eventing and Jumping as he transmits Esteban's blood. Pegasus has an admirable osteo-articular status as well as good fertility.

Pegasus is sired by Feeling Good Saucourt, a good winner in CCE, ICC 122 (20)