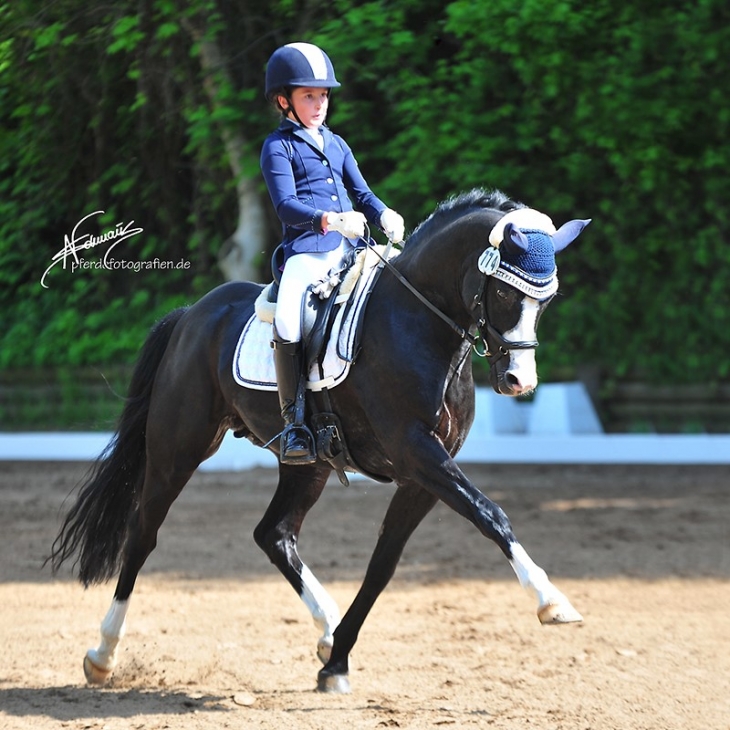 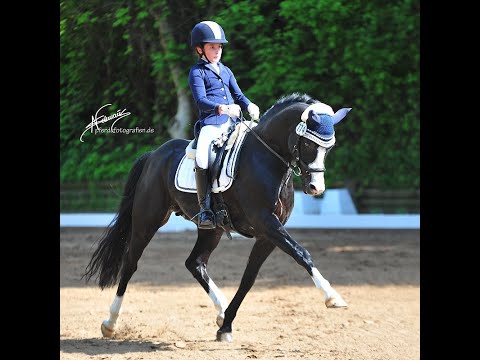 At his approval, the judges called him "a harmonious stallion with a lot of breed and made in sire." RM V-Power is a very engaging stallion with impeccable character, excellent balance and flawless cadence. Always impeccably calm, he has shown great ease under saddle from his first few months in the saddle.

This elegant black pony comes from one of the best bloodlines: "Nadin" and "Valido" have been crossed 14 times. His siblings are very successful in dressage, like "Veltin", "Valery", "Valido's Junior", "Valido's Snow White" or "Vic". Some of them have participated in the Bundeschampionships. All his sons were approved and his daughters are State Award-winning mares.

Approved in 1988, Valido is one of the major stallions in Germany. With 25 stallion sons and 28 state prize-winning daughters, he has become one of the must-haves for anyone looking for quality! One of his sons, Valido's Contrast, was German champion for 5 and 6 years old. Valido can also be found in the papers of the very good Noir de Luxe, the sire of FS Numero Uno.

Approved in 2012, V-Power placed easily and won several A- and L-level competitions and then qualified for the Bundeschampionships in 2014. He passed his stallion performance test with a final score of 7.71 and is now licensed as a Performance Stallion.

During the 2015 season, despite a reduction in the pace of training and competitions, he achieved 5 placings and in particular a fine 4th place in class M. In 2016, he was part of the "FEI pony" with which he prepared for international competitions.

Since then, he has devoted himself to the M (Amateur 1) and S (Pro) classes, under the saddle of his very young rider, with whom he wins and is ranked very regularly.

In 2020, he was elected Best Pony of his studbook for the 3rd consecutive year, in view of his sporting results.

His first generations of foals are well-built, with chic. One of his fillies actually won the gold medal in 2014. In 2020, his son, Kaducée de France Jeu, won the French Championship for male foals.

V-Power will ideally cross with pony mares who have frame, character and are in need of locomotion. He will undoubtedly bring his amplitude, his very good back, his chic and his balance.

He also has an excellent jumping stroke, with a good back passage, a nice forehand movement and a very good rocker.