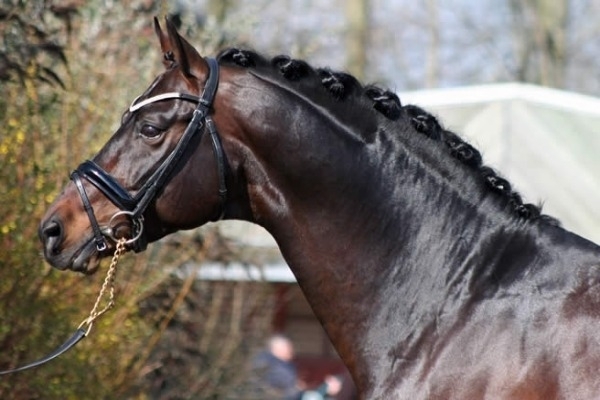 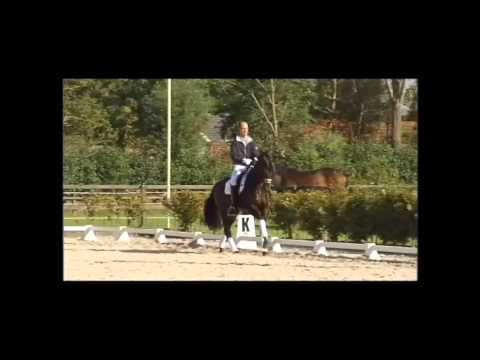 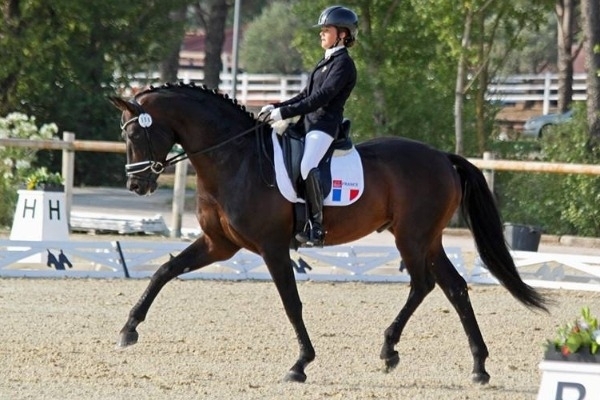 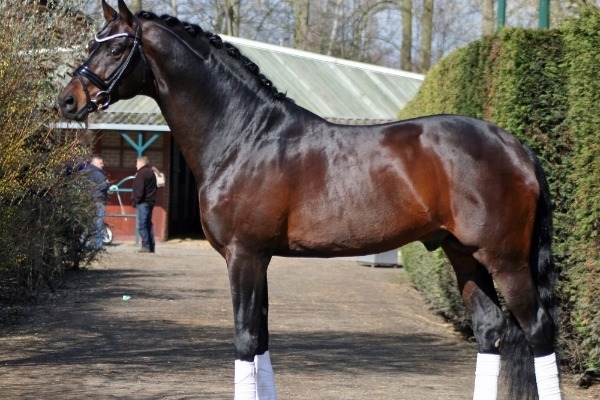 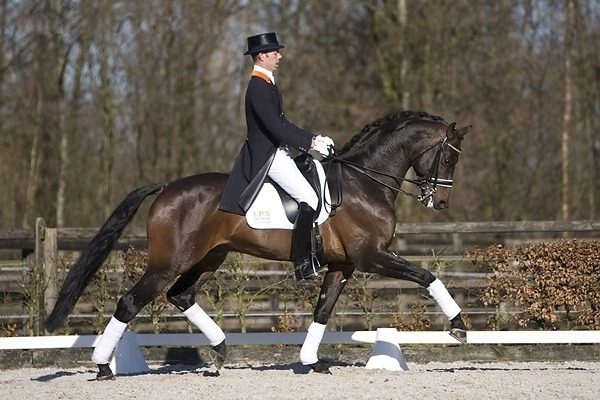 Sandréo's dam is Pretiffy, recognized Keur thanks to the quality of her offspring in dressage. Among her offspring, we find notably Zappa who was a winner in Grand Prix dressage. Pretiffy is the daughter of Flemmingh, a famous stallion who left his mark on Dutch breeding and produced Krack C, one of the best Dutch dressage horses.

Pretiffy's offspring include Zappa, who won the Grand Prix dressage.

Her great-granddam Dreamstar is a high-scoring dressage KWPN mare who sired Number One, who competes in dressage Grand Prix, and Zithalia, who has won CDIs and St George events.

His sire Sandro Hit is a well-known stallion who was German Champion in 1999 and World Champion 6-year-old. In 2000 he won the title of "Best Young Stallion". From 2012 until today, he is ranked in the Top 10 of the best dressage stallions in the World. In 2017 and 2018, he got the second place in the world ranking of dressage stallions WBFSH. In 2019 and 2020, he was ranked third in the same ranking. In 2017, Sandro Hit was voted 8th best sire of young horses in Saumur. He has produced 140 stallions such as Sir Donnerhall, who was French Pro Elite Champion in 2018 and was 43rd World Performer of the Year in 2019. His son, Soliman de Hus was Supreme Champion of the Hanoverian Körung in Verden at the age of 2 years old and obtained his 30-day test as well as his 70-day test. His offspring are known to perform well in breeding competitions and are highly prized at auctions. His son Poetin for example sold for €2,500,000 at PSI sales. Sandro Hit is also known for siring Showtime FRH who was the 3rd world performer in 2016 and was crowned Olympic Team Champion at the Rio Olympics.

His paternal great-grandsire Sandro counts within his progeny products evolving in Show Jumping such as Silvio I and II as well as Sandro Song.

Sandréo was Vice-Champion of the NRPS approval in 2003. The following year he won the Pavo Cup for 4 years old dressage horses and was labelled dressage at Saumur. In 2005, he won the 1st place in the L-level stallion final in Hertogenbosch. He also won the KWHS circuit and the KWPN circuit.

Sandreo is a dark bay stallion who stood out in his approval tests at Ermelo. He has a very good character, excellent trot, good propulsion in the canter as well as good movement quality. He bequeaths his model, expression and size to his offspring. He can cross with blood mares since he has a strong mind.

His offspring are highly sought after. He can sire eventing and dressage horses and can be used as a cross for Hunter and Show Jumping. Sandréo cannot produce chestnut horses as he is homozygous bay.

He is a recognized sire who was voted 19th best sire of dressage winners on the WBFSH world level in 2017 and has subsequently been listed for the two succeeding years. His offspring stand out and are differentiated by long legs, great gaits, strong presence, significant ease under saddle as well as good balance and suppleness. A large number of his offspring are competing in Dressage at the International Grand Prix level as well as in Eventing from CCI3* to 5* level. In 2006, one of his sons obtained a record by being sold for €35,000 at the KWPN auction. In 2014, he was ranked among the top KWPN stallions on progeny with a reliability score of 93%. In 2018, he was voted the 3rd best sire of young horses by earnings in Cycle Libre Dressage and was ranked the 2nd best sire of Winners in Cycle Libre Dressage in 2019.

Among his offspring are Alphaville NOP who was a Team Gold Medalist on the Dutch team at the 2019 Para-Dressage in Rotterdam, as well as Adamo, who was approved at KWPN and in 2013 and 2014 became the top KWPN sire. He also produced Sanbejah des Abeilles, Champion of the male Foals in 2006 at Saumur and 9th of the 3 years old Championship in 2009.

The following year, Tacoma d'Horset achieved a clear round at the World Equestrian Games in Tryon. Sandréo is also the sire of a large number of CCE and dressage performers such as Coco Channel, Bueno Hit, Séduction de la Folus, Bonnie du Roupy and Dolce Vita. Many of his offspring compete in the International Grand Prix and Inter.