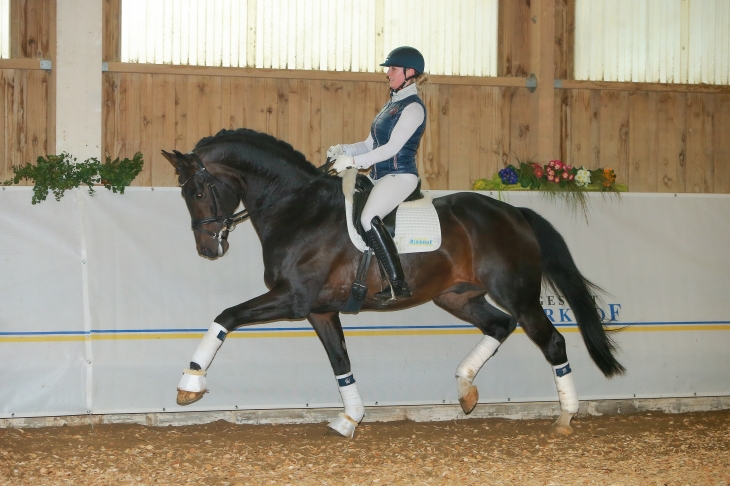 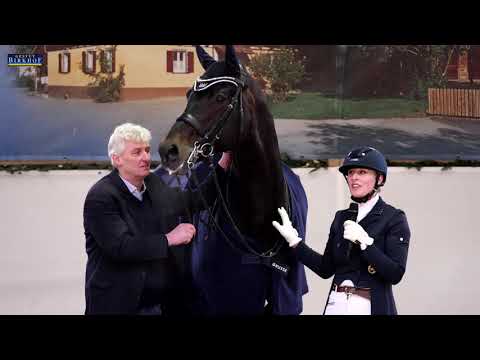 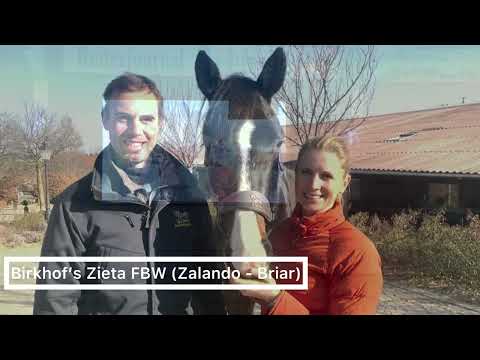 Zalando is a son of Zack x Sunny-Boy x Donnerhall. Zalando is a stallion with a good frame and great movement. He passes on these qualities to his offspring. Today under the saddle of the young Anna Casper, Zalando is well placed or winner in Grand Prix dressage events up to S*** (in the junior rider category).

Approved at the South German Stallion Days in Munich-Riem in January 2013, Zalando passed its 30-day test in Neustadt/Dosse (ease under saddle 9.00) at the end of 2013 in Neustadt/Dosse. At the Bundeschampionate in Warendorf in 2015, he won the small final and placed 8th in the final of the 5 years old Championship. In 2016 and 2017, Zalando placed in the M*** and S* dressage. In 2018, Zalando was successful in dressage S* and St. Georges Special under the saddle of Nicole Casper. On March 22, 2019, Zalando wins a Grand Prix S* dressage test with almost 71% in Pforzheim at the "Nordbadener-Dressur-Frühling". On April 14, 2019, the couple wins an S**/Inter I dressage test in Walldorf. On April 22, 2019, at the "Dressurfestival Zeutern", Zalando is the second best horse in a S** test and fourth at a Saint Georges Special test with 72,19 %. In August 2019 at the CHI Donaueschingen, Zalando won the Saint Georges Special qualifier and placed 3rd in the final qualifying for the "Nürnberger Burgpokal" in Frankfurt. The couple Nicole Casper and Zalando gets the 3rd place at a S* Prix Saint Georges event in Reutlingen in October 2019. In December 2019, they participate in the "Nürnberger Burgpokal". In June 2020 in Kronberg, Zalando participates in a dressage S*** - Saint Georges Special. In July 2020 in Darmstadt, Zalando is 6th in a S*** event. Since June 2021, Anna Casper, one of Thomas and Nicole Casper's daughters, has been riding Zalando in CDI dressage classes for junior riders. The pair are winners or well placed in S**/Inter I dressage events

The gelding Zum Glück, born in 2014, was the Southern German Reserve Champion of 3-year-olds in 2017 and the Southern German Champion of 4-year-olds in 2018. At the Bundeschampionate in Warendorf 2018, Zum Glück was 2nd in the qualification. Olympic rider Sönke Rothenberger made his acquisition. Zallas and Papagena, born in 2014, were finalists at the Regional Championships in 2017. Zoé, born in 2015 out of a dam by Fürst Romancier, is Baden-Württemberg 3-year old champion and 3rd best gelding (riding event for 3-year old geldings and mares) at the South German Championships in 2018. Zasa S became a state award-winning mare following her excellent marks in her test in October 2018. Zauberhafte was voted best 2 year old mare in Baden-Württemberg in Weilheim in October 2017. The mare Papagena by Zalando x Lanciano, became runner-up for 3 years old at the Bavarian Regional Championship in 2017. Zaza S, state award-winning mare, born in 2014, by Zalando x Argentinus, was the best mare at the test in October 2018 in Stutensee. Zakando, born in 2016, won the qualification for the 4-year old final at the Baden-Württemberg Regional Championships and was second and runner-up at the final. The mares Gräfin Zalanda, Caribic, Zarin, Zamunda, Zurprise ... are highly rated at the mare presentations (Landesstutenschauen).

Zalando brings together the blood of the best Dutch breeding stock such as Zack, Rousseau, Ulft and Jazz with recognized origins such as Sandro Hit and Donnerhall. Zalando's sire, Zack, was voted Supreme Champion of KWPN approval in 2007. In 2014, Zack was declared Denmark's "2014 Stallion of the Year". In 2018, he was successful at the highest level of Grand Prix dressage, including a 17th place individual finish at the WEG in Tryon (7th place team - Denmark). At the World Cup Dressage Grand Prix Kür in Herning in March 2018, Zack won a sensational 84.89% under Daniel Bachmann Andersen.

Zalando's dam St.Pr.St. Wunderschöne had a very good test in the resort. In 2009, she was vice-champion of the Oldenburg 3-year-old mares and vice-champion of the Bundeschampionate for 3-year-old geldings and mares in Warendorf. Waldfriede's maternal line has produced many horses that compete in dressage at S level. The maternal grandsire, Sunny Boy by Sandro Hit x Donnerhall x Pik Bube I, is a very good dam sire. His dam Fantastica is a full sister of Don Schufro. From this dam line 'Finnländerin' also comes the stallion Don Primero. Sunny Boy has produced horses that are successful in S-level dressage, but also in show jumping and driving.