Principles for the evaluation of Danish Dressage Stallions (DWB) 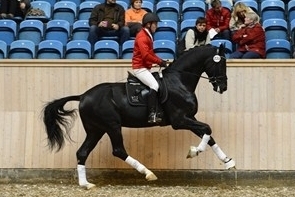 Blue Hors Zack, Sezuan, Zonik,... All these stallions are sure to thrill dressage enthusiasts... What they have in common is that they belong to the Danish Warmblood Stud Book (DWB). This stud book has succeeded over the years in creating a very successful selection which has enabled it to get a place of choice in the international rankings, particularly in dressage. This is not a coincidence, it is the fruit of a long time selection work through a very complete evaluation system.

Every year in January the Danish Warmblood Society carries out the pre-selection of young stallions that will turn 3 years old in the year. Between 120 and 150 young horses try their luck in the hope of being selected for the Danish Warmblood National Stallion Show in Herning in March.

It is at this stage that the breeder must decide whether the stallion will compete in dressage or jumping.

1. Each young dressage stallion is presented individually for approximately 3.5 minutes on a 20m x 40m arena, in freedom for the youngest, or possibly ridden for the 3.5 year olds and over if the owner chooses this option.

2. Each stallion is then presented in hand, in groups of a dozen. A first selection is made at this stage, to be allowed to participate in stage 3.

3. The young stallions selected at the end of stage 2 have approximately 1.5 minutes to be presented to the judges on a hard surface.

4. These same stallions are presented again in freedom on the track, except for those (over 3.5 years old) that the owners have chosen to show when being ridden in stage 1: they must be presented ridden again in stage 4.

5. They are finally shown in hand again, and are subject to a second selection: the selected stallions will have the honour of being invited to the Danish Warmblood National Stallion Show in March, in Herning.

The young Danish stallions are shown on an enclosed jumping arena; the fences are arranged as shown in the illustration below.

1. The young stallions are first warmed up individually on the ring and then presented on the fences. Stallions over 3.5 years of age may be ridden if the owner wishes to do so, and in this case are presented on a small course. Each horse has a presentation time of approximately 5 minutes.

2. As with the dressage stallions, each show jumping stallion is then presented in hand, in groups of a dozen. A first selection is made at this stage, to be allowed to participate in stage 3.

3. The young stallions selected at the end of stage 2 have approximately 1.5 minutes to be presented to the judges on a hard surface.

5. They are finally shown in hand again, and are subject to a second selection: the selected stallions will have the honour of being invited to the Danish Warmblood National Stallion Show in March, in Herning.

In Herning, at the National Stallion Show, the best young stallions are selected for the next step: the 10-day test.

The performance tests for Danish stallions are aimed at selecting the best sires in terms of functionality and ease under saddle, always with the ambition of producing horses that perform at the highest level in dressage or show jumping.

This test takes place in the spring, after the National Stallion Show. It is an observation test, which as the name suggests lasts 10 days, and is open to 3 year old stallions that are approved to take part in these tests. It is open to both dressage and show jumping stallions.

During this 10-day period, the stallions are subjected to very moderate efforts, in accordance with their young age. They are observed in their behaviour in hand, during handling, in the stables and under saddle. They are not shown jumping under saddle.

They are not graded and there is no "final test". The DWB Stud Book Breeding Commission and the Test Station Manager agree on which stallions have passed their 10-day test. At the end of the test, a description of the young stallion is written.

The primary objective of the 10-day test is to exclude from breeding stallions with undesirable characteristics, whether morphological, functional or behavioural. Young stallions that pass the 10-day test are allowed to breed in the current year and to take the next step, the 35-day performance test.

The 35-day performance test for Danish stallions (DWB) is held in late autumn. During this phase they are evaluated twice by the same test rider. In addition to the commission judges, the test station manager follows and observes the stallion during the entire time and participates in the scoring.

The scoring is based on a total of 1,000 points and takes into account gaits, functionality and mentality. If the stallion scores between 700 and 800 points, he may be allowed to breed in the following year, but will have to take the 35-day test again the following year.

If he scores over 800 overall, he is selected for the final approval session at the Danish Warmblood National Stallion Show where he is scored as part of his "lifetime approval" as a DWB Stud Book stallion.